Story #3: With colleagues, I rode a broom! 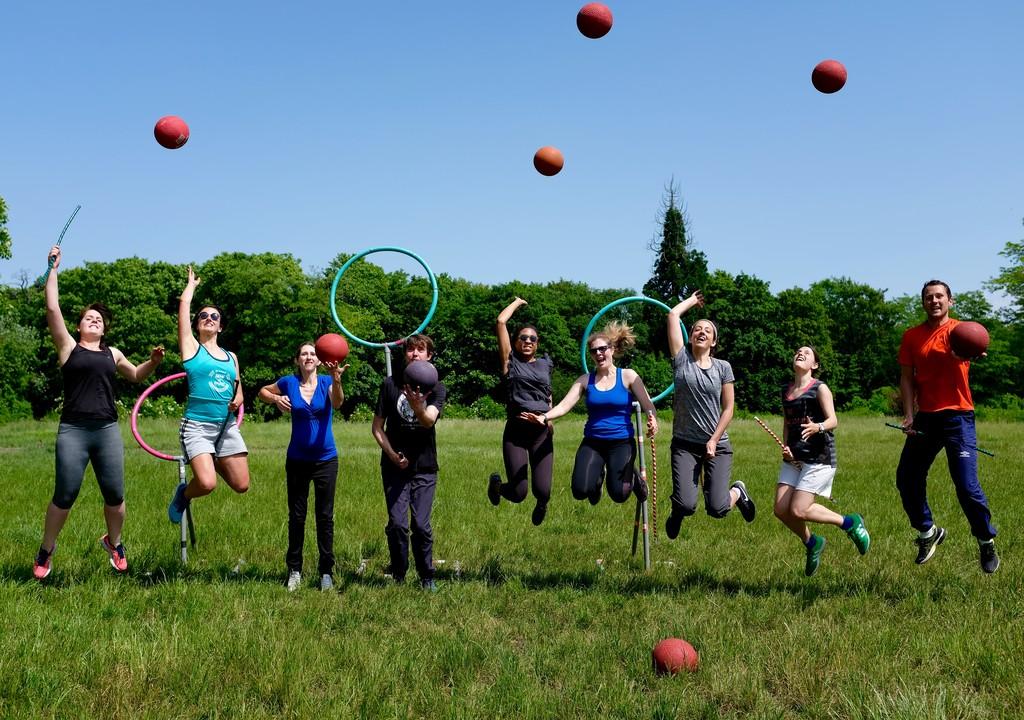 Story #3: With colleagues, I rode a broom!

At first I thought it was a joke! A colleague's party or something like that... It's fashionable to invent concepts.

The clue was brief and enigmatic: "experience an immersion through Harry and Hermione's sport". I'll let you imagine the jokes and innuendos of the colleagues...

We met on Thursday at 5.30 pm on a large esplanade in the Bois de Vincennes. Jogging suits and trainers were compulsory. Large hoops segmented a field, covered with balls of different sizes. Dozens of "brooms" (actually sticks) were waiting for us to ride them.

We were going to participate in a Quidditch initiation!

What-what? Quidditch, the sport of the famous wizard Harry Potter and developed as a real sport by several clubs throughout Europe.

The principle? 2 teams of 7 players riding brooms. The objective: to score as many goals as possible and catch a magic ball, the golden snitch. The goals are made up of rings placed at the top of large posts. There are 3 on each side of the field, each of a different height. They are placed in a goal area where only the chaser in possession of the "souafle" (another bright red ball) can enter. If either side manages to steal the "golden snapper", the game is over and the winner is declared.

The reluctance, like any activity, was felt in the first few minutes. The fear of too much sporting effort... The apprehension of not getting caught up in the game... We would never have imagined such an addiction...

The initiation takes place in 3 stages. A first part during which we are taught the rules. There are so many of them... They are fascinating and really fun. A short jog over a few meters and then we discover the different balls.

The second part is based on training and first passes. One session particularly entertained our team. A tennis ball in a sock (actually the "golden snitch") is attached to the back of our trousers. In pairs, each of us has to try to snatch the precious ball from the one facing us. Easy like that. Impossible in real life. Except for our famous Charlene who, after only two attempts, managed to snatch the coveted object from our HRD who will never make Quidditch his new passion...

The third part of the activity is the apotheosis: the match! Against theFrench Quidditchteam! Yes, there is a national team, and they were training right next to us since the beginning. We didn't pay any attention to them, so focused on our efforts and progress! Now we are going to beat them! We motivate each other. I come out of my usual reserve to shout out to everyone the name of our company followed by a motivating and invigorating "World Champion! "motivating and invigorating. The slogan is taken up immediately and everyone takes their places on the pitch. Ready for battle.

I never told you about Zinedine? The team's IT man. Discreet, shy, solitary... During the " Axe Throwing " outing(see the debriefing here), he distinguished himself by never having touched the target... in 6 attempts. Positioned next to me on the field, he hasn't said a word since the beginning of the activity. I notice an unusual look though. His eyes are fixed on the ball, a fury of victory can be felt. It's amazing!

The match lasts about twenty minutes. Shot for shot, an almost perfect tie. Of course the French team is rather lenient despite our over-motivation. But the 23rd minute will mark my day and my vision of my little Zinedine, to whom I realise I have spoken too little.

The game takes place on the left side of the field. I rush there. A shadow almost hits me head-on. I escape a shock that was going to be violent. It's Zinedine who, in a frenzy I don't know why, turns into Usain Bolt. A real sprint towards a lone player at the other end of the field.

Then his body jumps up and down like a rugby player flattening a try. His arms reach out and grab the back of the player's shorts, who doesn't even have time to understand the play he has suffered. Zinedine has just identified the "Vif d'Or" and, unbelievably, succeeded in taking it away from its owner.

The whole team is stunned by this, which means the end of the game and the victory of our group over the French team... thanks to our colleague whose presence we almost didn't know 20 minutes ago. Zinedine President! What a pleasure to see him throw his arms towards the sky and shout his victory. Quite an experience to remember...

The group photo is compulsory. We immortalize the moment, brooms between our legs, souafles and gold in hand. The "Cheese" is replaced by the new victory cry that will certainly follow us to the office for many months to come: "We are world champions! "

When is the next outing, boss?

I remind you that they made me throw axes, ride a broom... next month, I think I'll end up on the moon! From now on, I won't doubt anything.

i'm ready for anything.